Best laid plans and all that…

The year we said “stuff it let’s LIVE…”

TUTORIAL: How to distress paint furniture

Back in June, I blogged that my Dad was officially in remission from his gastric cancer. Unfortunately, within about 3 weeks of that post, Dad started to go downhill again. His stomach discomfort started to increase, his weight loss began again, and his oncology appointment was brought forward for investigations. This is the primary reason that I have been very quiet lately.

As is often the case with Dad, the scans didn’t reveal any significant findings of cancer. His overall condition told otherwise though and his liver results became indicative that things were not as they should be. The decision was made to begin chemo again, in the hopes that would shrink the cancer and be as successful as it was last year. But, the words of Dad’s oncologist were “now is the time to have faith.” And as Dad had already outlived his original prognosis, my heart wasn’t filled with much hope.

Especially, as all year, Dad had been battling recurrent sepsis infections caused by his liver. These were proving almost a bigger battle for him than the cancer itself. Every infection took that much more out of him than the last, and the time between infections became smaller and smaller. The really scary part was, that with these infections, Dad could be fine one minute – having a great day, feeling pretty good, playing board games with us, and then within half an hour later need to be urgently rushed to hospital with a spiking temperature and the look of death, requiring immediate IV antibiotic intervention. This particular feature of his illness put me on constant edge – and made me concerned to make any extended travel plans – because it made Dad’s illness so unpredictable.

Last year, when Dad was extremely unwell and had been in hospital for most of 3 months, the turning point was having a liver stent put in. The stent helped his body process bile again, allowing him to start chemo; ultimately shrinking the cancer and allowing him more time. But last November, and 3 times early in 2017, Dad was hospitalised with life-threatening sepsis.

On the fourth sepsis infection, in early 2017, the doctors agreed to give him another stent procedure, because it was clear the infections were not going away without it. They had been reluctant because it’s an incredibly high-risk procedure. During the procedure, they put a second smaller stent inside his existing stent in the hopes that would stop the infections. Unfortunately, as a result of the procedure, Dad inherited an antibiotic-resistant superbug.

He fought this like a trooper. But it wasn’t long before the infection was back again. I’m hazy on the details from there, but at some point in August Dad was operated on to have a 3rd stent put in. Unfortunately, this too caused infection – this time not one superbug, but two. Requiring the two strongest IV antibiotics available, and an extended hospital stay through most of August.

At one stage things looked to be improving, and Dad came home for 8 whole days. But, unfortunately, the infection came back and on Father’s Day (3rd September), Dad was rushed to hospital in an ambulance. I hadn’t had a chance to see Dad yet that day, but those who did were of the opinion that it might be the beginning of Dad’s end. It wasn’t a good Father’s Day.

Later that week, Dad had improved significantly from the antibiotic treatment. But because it had been going on for several months, we had a family meeting with Dad’s oncologist at the hospital about where to from here. The news was not good. We found out that the two infections he was already fighting had been joined by a third. The oncologist put into words what we already knew, that with all his challenges, and the fact the infections weren’t really responding to antibiotics, Dad was really up against the wall and that any more chemo would kill him before it made him stronger. She predicted that Dad most likely only had a short time left. Dad asked how long short meant. The answer was one that pained us all; Dad most likely only had weeks to live.

However, that may change – there was one more type of antibiotics he could try to fight the infection. The infectious diseases doctor said that if it was going to work, it would work within a week. If that was successful, then maybe Dad could become strong enough for chemo again. But, because Dad hadn’t really been tolerating the chemo this time, I wasn’t finding it easy to have faith in that.

Because the antibiotics were oral, the decision was made to bring Dad home in an ambulance, to be made as comfortable as he could be made, while we waited the week to see if the antibiotics would work. It became quickly apparent over the weekend that Dad was going downhill extremely fast. On Tuesday when the GP came to visit Dad, she suggested it was time to call the family. So, we called my brothers so that they could also have the opportunity to spend Dad’s last days/weeks with him. I officially took leave from work.

On 28th September 2017, my Dad lost his fight to cancer. He battled until the end with everything he had. Each day for at least the last 10 days I thought “surely today has got to be the day”, but Dad kept carrying on living much to my disbelief. If I didn’t think he was Superman before, I certainly did now.

I am so ever grateful that I had the flexibility to take leave to help care for Dad and spend time with him during this time. Caring for a loved one at home is a lot of work, but we are blessed to have a large family so that many hands made for manageable work. Dad got to stay in his own house, with the family around him and Mum by his side.

To be honest, it was a very traumatic time. Dad’s decline was slow and very very hard to watch. It’s hard to see any positives watching a loved one go like that. But in the end, I hold onto the fact that Dad went peacefully at home at dawn, just as the birds started in their song. He had been surrounded by all of his family in the weeks leading up to his death. We had all been granted the opportunity to say goodbye.

If I can think of one positive, it’s that Dad gave us the gift of a family time during that month that we will never forget. Times like this can divide families apart. But I truly feel like it brought ours closer together. Not just my immediate family – the time spent with Dad, Mum, my 3 brothers, our partners and our children, but also the time spent with my Dad’s and Mum’s siblings, who came to spend time and help in such immense ways. There are too many to name here, but hopefully, they know who they are and how thankful I am to them.

Dad’s funeral took place on Tuesday 3rd October, followed by a private committal the next day. Probably not too many people plan their own funeral, but the thing about knowing your death is impending is that that opportunity is there to plan yours if you wish. Dad was a planner through his entire life – and he got to be as specific as he wanted with the celebration of his life. Everything he asked for came to fruition and more.
They were two very moving and beautiful services. 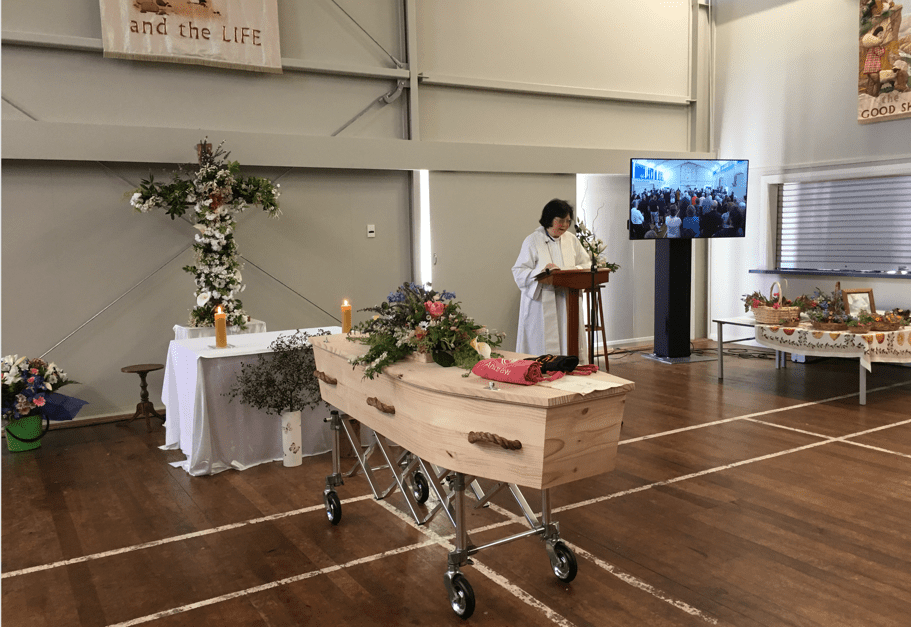 Now we start a new chapter and try to establish a new normal without Dad here. Dad had been terminally ill for almost 2 years – through the entire life of my business. His illness has been a factor in my decision making for so long, that the absence of it feels a bit surreal.

My Dad was one of a kind. He was always there for me, was one of my main confidants and he was one of the smartest and wisest people I know.
He will be missed more than he will ever know.
Rest in peace Dad

Kat Soper is a serial entrepreneur and Founder of The Helpful Academy. She lives with her husband and two daughters in whichever country they're calling home at the moment.